The Cursillo Movement in Burkina Faso

Located in West Africa,
BURKINA FASO is surrounded by six countries including Togo and Benin 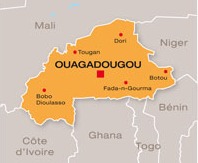 The Cursillo Movement is well enrooted in

This is the third country in Francophone West Africa

(after Benin and Togo)

sponsored by the MCFC through its

Committee for the International Expansion of Cursillo

The first Cursillo was held

in the Archdiocese of Ouagadougou

after two years of intensive preparation

Pierre OUALBEOGO, candidate at the sotouboua Cursillo, with his godfather, Godfrey ANAGONOU, Atakpamé diocesan leader and logistical support to the foundation in Burkina Faso. 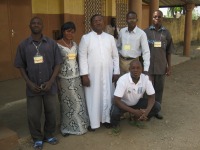 In the summer of 2010, after learning about the Cursillo Movement through our website, Pierre OUALBEOGO (CCM founder in Burkina Faso) is brought into contactwith Huguette Duclos, mandated by the CEI (an ad hoc committee put up by the Francophone Cursillo Movement of Canada).

Huguette begins an ongoing exchange with him via e-mail and Skype. Pierre is put in touch with two cursillo leaders of the Diocese of Atakpamé,Togo: Godfroy ANAGONOU and Fr Emile MIDAHOE who agree to sponsor him.

In April 2011, Pierre OUALBEOGO is a candidate on the first cursillo of Sotouboua(Diocese of Sokodé, Togo). This experience strengthens his desire to implement the Cursillo Movement at home and on his return, he begins to identify candidates with whom he may form the core foundation.

In August 2011, Pierre sponsors four candidates from Burkina and serves as a team member on a Cursillo weekend at Atakpamé. Upon their return to Ouagadougou, the five friends engage in postcursillo, holding regular weekly Group Reunions.

In January 2012, Pierre returns for a third time to attend a Cursillo in Togo. He brings with him, at Agbandi (Atakpamé diocese), three other Burkinabes, including Fr BOUGMA, and he holds the position of Assistant Rector, allowing him to fully realize what the organization of a weekend implies.

With such a preparation - conducted with great zeal and skill by Huguette Duclos, from the CEI-MCFC - and sponsored by Godfroy ANAGONOU and Father Emile MIDAHOE, from Togo, and also with much encouragement from the Bishop of Atakpamé, Bishop Nicodemus BARRIGAGH, who supports the project since its inception, Pierre OUALBEOGO, Father Gilbert BOUGMA and the six Burkinabe cursillistas undertake with faith and enthusiasm the foundation of the CCM in Ouagadougou.

The first cursillo in Burkina Faso takes place on July 26-29, 2012, at Ouagadougou. Pierre OUALBEOGO of course is the Rector, while his godfather, ANAGONOU Godfroy, serves as his Assistant. Fr Emile MIDAHOE is the Spiritual Advisor and Fr Gilbert BOUGMA, the Spiritual Advisor Assistant. The outcome: eighteen new Burkinabe cursillistas full of enthusiasm are quick to join in "group reunions" to share with one another the growth that has taken place within each of them and to bring a Christ-like attitude to their environments. This initial core is really full of promises.

To know more about the Country (in French)