The Cursillo Movement in France

In May 2001, cursillistas from Spain came to Paris to give a first Cursillo to the Hispanics living in Paris. A few more cursillo weekends were given to the Hispanic community and then, together with the Vietnamese cursillistas, they decided to give one in the French language. They asked for help from the Francophone Cursillo Movement of Canada. Since May 2001,almost thirty Cursillo were given in Spanish for Spanish nationals in Paris and vicinity. 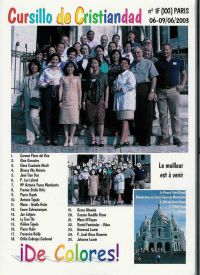 On June 6-9, 2003, the first French-speaking Cursillo in Paris was held at the Prieuré St-Benoît des Sœurs Bénédictines located near the great Basilica of the Sacred Heart of Montmartre. It was a co-ed cursillo with eleven candidates. The Rectors were Normand Laurin and his wife Johanne, from Quebec, and the Spiritual Advisor was Father Luc Lafond, also from Quebec, assisted by Father Jordi Girau, from Madrid. Among the team members were cursillistas from Spain, Portugal, Luxembourg and Vietnamese living in Paris (See the photo of the participants, right. Click to enlarge)

In various occasions and in various ways, the MCFC helped with the establishment of the Cursillo Movement in France. However this implementation of Cursillo in France is sponsored primarily by the MCC of Madrid. Since 2003 about fortnight cursillo weekends in French were given.

Jhonny Bueno is the new head of the Cursillo Movement in Paris for the French and Spanish community since December 2016. He succeeds Gustavo Vera.
Contact : cursillos.paris@gmail.com

The chairman of the MCFC committee helping with the expansion of the Cursillo Movement in the Francophonie, ("CEI-MCFC": Comité pour l'expansion internationale - Mouvement des Cursillos Francophones du Canada) is:
Huguette Duclos Tél : (514) 352-0048 )

We have no current news - and hoping to get some - about the Vietnamese Cursillo community in Paris.

The hispanophone cursillistas in France form a small active community. They meet every fortnight in the parish of St. Pierre de Chaillot in Paris, to share their faith and their love of Christ, in a joyful atmosphere of sincere friendship. The Group Reunion structure has not yet been put up, but the Community leaders are looking forward to improve not only the "cursillo" but the "precursillo" and "postcursillo" as well.

As for the French Cursillo Movement in France, its implementation is "slowly but surely". The Cursillo community in Paris is mostly made up of Latinos, as they are still experiencing some difficulties with the recruitment of French candidates.