History > 1. Genesis of the Cursillo Movement

Genesis of the Cursillo Movement

"To accurately relate the exact beginnings of the Christian Cursillos, one must go back to its roots, to the currents which made them possible, and spell out all the worries which lead to their birth. They, for sure, were not born all of a sudden, such as a miracle or the light of a newly found star which startles us in the dark of the night. They are not the work of one single person, but of a group of people, of an atmosphere, of a common desire, convergent at first and then shared." (Father Payeras)

A devastated Country
Immense Powers Granted to the Catholic Church

Those who have studied world history will remember the horrible civil war which shook this country in the years 1936 to 1939. Franco’s troops won the war but left behind a ruined country and five hundred thousand (500,000) dead!

The regime put in place by Franco granted unimaginable powers to the Catholic Church. In most of the country, where the Catholic Church had been persecuted, the after the war catholics, still remembering vividly the "martyrs of the crusades" (many beatified by John-Paul II), had an epic, vindicative, and at times agressive behaviour. In Mallorca, to the opposite, as was the case in other areas where not only had catholics not been persecuted but had participated in the pursuit of the reds, they were almost ashamed to make use of their newly acquired powers, since the social prestige of religion was non existant.

The Island of Mallorca

Its History.
Its religious character 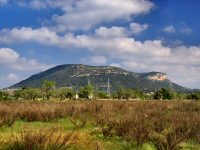 Mallorca was first colonized by the Romans, and then occupied by Muslims for five centuries. Jacques 1er, King of Aragon reconquered the island on December 31, 1229. Being isolated and mountainous, it became, in the middle-ages, a place of choice for monachism. Many congregations for men (7) as well as for women (14) were founded in Mallorca. Finally an important trait of Mallorca’s spirituality is its devotion to the Virgin Mary. Sanctuaries dedicated to Mary are numerous, namely the Monastery of

Lluc. The two sanctuaries which sort of surround the St-Honorat Monastery are also worthy of mention: just below, in a grotto is Our Lady of Grace sanctuary, a dedication quite fitting since the original Cursillo stemmed from five rollos on the grace. And above, at the top of Mount Randa, is the "Virgen de Cura" sanctuary, which may be translated in "Our Lady of Care". The history of these two venerable sanctuaries has ties with the Cursillo Movement.
Our Lady of Grace Sanctuary

Grand pilgrimage for young men: The objective becomes a religious one.
Manuel Aparici and Sebastian Gay

In the euphoria of the after war era, Manuel Aparici, exceptional man and Spain’s national chaplain, exercised the national leadership of the Catholic Action for Youth. (The request for beatification of Manuel Aparici was submitted to Rome in 1944). During the country’s republican era, the Catholic Action spread the idea of a pilgrimage for young men to the Santiago de Compostela basilica. The event was to prove to the anticlerical organizations that the Catholic Church could also mobilize crowds of young men. However, due to the military troubles and the unrest, the event kept on being postponed. But after the Church settled on the winners’ throne, it was believed that the demonstration still made sense, in the face of the powerful Phalanx (Falange Espanola), which was even more resistant to the influence of the Church.

The objective of the pilgrimage, which could have been political, gradually evolved toward a more spiritual one, thanks to Manuel Aparici’s exceptional personality and deeply rooted faith. He did gather around himself young men who were determined and excellent communicators. They developed plans for a session called "Cursillos for Leaders of Pilgrims", a course which reoriented the pilgrimage to be an experience of Faith, and which goal was to lead "one hundred thousand young men, in a state of grace to Compostela". Father Aparici had obtained the blessing of Pope Pius XI for the project.

At this point, we wish to introduce Sebastian Gayá, the young director of the Catholic Action, whose name will often come up. He was well known in spite of his youth. Immediately following his ordination, in 1937, he was assigned to the C.A. for Youths, for whom he lead all closed retreats, radio appearances, and articles in their magazine Proa. He consequently was supervisor for the Cursillos for Leaders of Pilgrims where he met Eduardo Bonnín.

Compostela. In 808, Theodomir discovers St James’ grave and moves it to Spain, in Compostela. When Christians are unable to go to the Holy Land because of the wars, they go to St. James grave. Compostela becomes, with Rome and Jerusalem, one of the great pilgrimages for Christians.