Toward the San Honorato Sanctuary on Mount Randa, on the island of Mallorca in Spain, where the first official cursillo took place.
_________________

Commemorative plaque of cursillo no.1 at the entrance to the sanctuary of San Honorato. 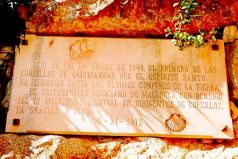 Father Capó, another pillar of the movement.

"This #1 Cursillo was the consecration of considerable efforts, dreams and the result of a vision. The pastoral and apostolical climate of the time made it possible."

His interrogation was: What was the innovation in these new cursillos?   Were the "Cursillos for pilgrims" already Cursillos?

"In the previous "short courses", each and every leader had his own way to develop given themes in the number of rollos he wished to. For the new cursillos, the School of Rollos gave strict ways of doing. remember that the rollo called "Ideal" was introduced later on, after the leaders evaluated the first cursillos. Then, of the first 5 rollos on Grace only two of them were kept: Grace and the Obstacles. At first, the Sacrements rollo was not implemented as it is now. I must say that, as unbelievable as one may think, it was given by a seminarist, who was only present for this rollo, explaining briefly the essence of each of the sacrements and the given conditions for the sacrement to be valid. From time to time, it was adapted to what people really needed to know. Regarding the meditations, it took longer for the plans to be drawn up. They were left up to the spiritual director. Then, following bad experiences, we thought we should write plans. Examples from Mgr Thot were used for the first meditation. We took the "Film of Life" since we wanted the young men to be interested right from the beginning. I sometimes completed the "Prodigal Son" teaching, talking of Gethsemani, to awaken our feeling of guilt in Christ’s Passion. The "Three Looks" meditation was not always well understood since the aim is not to describe Jesus’ look but to "feel looked upon by Him"! It is one way to look in oneself." (p. 29)

The changes of name of our Movement are an interesting part of its history. From January 1949 on, the name lost its meaning. Named until then "Cursillos for Leaders of Pilgrims", a new name had to be found since the pilgrimage to Santiago was a thing of the past, and cursillos were still given. Being that the new objective was to conquer young men in the name of Christ and bring them closer to God, the name "Cursillos de Conquista" was adopted. The name stood until March 1953, that is until Cursillo # 33. Until then, many of the young men were joining Catholic Action (C.A.), which became their post-cursillo since they took part in the C.A. activities.

However, some participants of the 34th Cursillo, young men and adults, were more or less interested in C.A.. A new post-cursillo had to be thought of, especially suited to them. The attitude as described in the Lazarus episode : "Untie him, let him go!" was then adopted.

In June of 1953, PROA magazine raised reservations about the new name: "Cursillos of Conquest". It just so happened that in the same year, on December 20th, Mgr Hervas spontaneously thanked God for the "Cursillos de Christiandad" , name which was often used by Pope Pius XII. He had just given the Movement its new name, which still holds today.