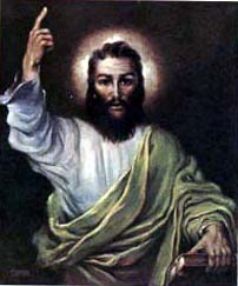 We wish to tell you how St. Paul has officially become Patron saint of the Movement. The following was written by Father Gayá.

"And if we had been asked to pick a saint protector, St Paul would most likely not have been at the top of the list...  Sure we did not ignored the fact that the figure of the apostle, pagans’ evangelizer, stood out in the evangelization atmosphere in which the movement was rising. But most likely other candidates would at least have been considered.  For example, St John, young apostle, the one with invincible fidelity, as he was called during the evening of prayers held every year on December 27, at a time when the movement was exclusively devoted to young men. And of course we might have thought also of St James, venerated apostle of Compostela, where the 100,000 young men’s pilgrimage had been held, and which was the cultural birth bath of the Cursillo Movement. The thruth is that no one omong the founders raised the question of a patron saint even if the need for support was felt, because the first steps of the Movement were marked by huge difficulties and much suffering. The tares kept on growing in the wheat field. It is however the evangelic seal of the divine works, constructed by the Holy Spirit"

Where did the idea come from?

"We need to go back ten to twelve years after the first Cursillo given in 1949. The CM had spread to all dioceses in Spain, to nearly all countries of  America, and to certain parts of Europe. In the beginning of the sixties, the national secretariats began to appear: first in Mexico, then in Venezuela and shortly after in Spain. On June 12,1962, the bishops set up our national secretariat, naming Mgr. Hervas as the first secretariat director, and myself, author of this paper, vice-director. Among our undertakings, let’s mention the first national Ultreya in Tarragona in 1963. Why Tarragona? For many reasons.

"First, 1963 was a Jubilee year during which the Church of Spain commemorated the 19th centenary of St Paul’s visit to Spain. This was celebrated in Tarragona. Secondly, the bishop of the city was cardinal Benjamin de Ariba y Castro, who was called by Mgr. Hervás, during the Ultreya: "St Paul’s cardinal and Father of Cursillos". He stood up for the Movement in previous years in stating loud and clear "the spiritual fruits he himself had been able to discover in the people who lived the Cursillo experience". Finally, the third reason was the great number of cursillistas in this diocese."

What Went On at the National Ultreya?

"In his talk, during the Clausura, Mgr Hervás stated: "I have heard from authorized lips (those of the Apostolical Nuncio) that if St Paul were to come back on earth he woul become cursillista. This seems to me as too much honor for our Movement and the person who said it is kind-hearted. I would however venture to say, quite humbly, that if St Paul were to come back and walk the lands of Spain preaching the Gospel, those with the greatest enthusiasm in following him would be cursillistas." And with an heartfelt hope, Mgr. Hervás added: "It is why I would like the competent authority to grant us St Paul’s protection for our movement, protection dearly wished by the one person who loved and defended the Cursillos so heartedly, Cardinal De Ariba y Castro". Once the cheering stopped, the cardinal’s words were eagerly awaited not only because of his status but mainly for his outstanding interventions with the roman congregations and  the Holy Father himself to save the Movement. During his talk, the Cardinal unveiled what had been a well guarded secret: he had already brought up the subject with Rome. 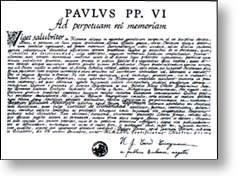 ..."In Rome, near St-Peter, after much thought and with the fullness of Our pontifical authority, We name and declare the blessed Apostle Paul, heavenly patron saint before God for the Cursillo Movement."

"The dark persecution hours against the Cursillo Movement were a thing of the past. Paul VI, in the decree talked about the "very abundant fruits produced by the Movement which pleased pastors and brought to them great satisfaction".

"Upon handing the parchment to Mgr. Hervás, Mgr. Riberi ended the interview by the simple invocation: St Paul, Patron saint for the Cursillos, pray for us! Mgr. Hervas then suggested that all our reunions end with this short prayer to state our confidence in our protector’s intercession to God. This action by Rome greatly rewarded us, founders, we who had suffered so much for the Movement."